The fabrics for tradition, the theater for vocation

The Peroni family of Gallarate come from a long tradition in textiles; their manufacture was already in operation in their hometown in Lombardy by the end of the eighteenth century.
In 1982, while the textile industry was deep in crisis, a young descendent of the family took over a branch of the firm that, since the 1950s, supplied its own fabrics to Teatro Alla Scala in Milan and the Teatro Regio in Turin, amongst others.
Guided by his father’s experience and driven by a strong interest for the theatre and lyric opera, he decided to concentrate the activity exclusively on servicing the stagecraft sector.
Extrovert in the manner of a burlesque actor, he rapidly gained popularity among machinists, lighting operators, decorators, costume designers, directors and stage designers, of that invisible world behind the scenes, where theatrical sets are created on a daily basis.
At Gallarate, on 16 March 2000, people came from all over the world and with every means of transport, even a minibus from the Scala, to pay their respects to the man who in less than twenty years had made this company famous throughout the entertainment world.

How? Right from the start Michele Peroni subjected the productions of canvas and tulle to repeated fireproof testing.
Velvets, silks and a myriad of other fabrics gradually broadened the range of products for stagecraft, followed by plastic materials, mechanisms for moving scenery and curtains, which he himself designed, tested and set up for production while “Peroni Prodotti e Servizi per lo Spettacolo” increased in fame thanks to word-of-mouth among stagecraft professionals who frequently turned to Michele for advice as well as for his products.
The company philosophy has developed along those lines, with the accent on flexibility, in order to satisfy the demands of the client who is perpetually in search of products of great effect, for which a swift delivery is essential (as in the entertainment business it is an eternal race against time), in addition to compliance with safety standards, information, technical assistance and the quality-price ratio of the products on offer.
In order to sustain the expansion of Peroni, Michele surrounded himself with new collaborators, whose professional competence today constitutes one of the company’s greatest strengths.
He made arrangements so that he got the exclusive to produce other materials that he had researched and to distribute them on the international market; agreements among which one need only cite that drawn up with Rosco, one of the names that count in the film and theatre communities, especially in the United States.
With the same materials Peroni began to make up curtains, backcloths and cycloramas in fabrics and to construct screens for front and rear projection, products that were soon requested by theatres not only in Italy and Europe but from all over the world.
At the end of the 1980s, Michele Peroni met Sabino Lenoci, a great lover of opera and prominent personality in cultural circles. “I went to Gallarate to gain support for a project I had had in mind for some years: a magazine for assiduous followers of opera. I already knew of the Peroni firm, considering their activity it seemed to me that they were the only people I could approach with my request.
I asked for Signor Peroni, and was directed to the office of a distinguished man of about sixty years of age.
When I explained to him my idea he told me that he was not interested.
They had invested heavily and were low on funds.
In effect, it was a small firm, smaller than I had expected.
While I looked around me and came to the realization that I had made a mistake, a lean young man of about thirty with dark hair arrived and stood behind my interlocuter. Feeling very disillusioned, I forced myself to listen to Signor Peroni while the man behind him distracted me by making unintelligible gestures.
I was not able to present my case in the way I had planned to. I was in the street, full of disappointment, about to drive off when I heard myself being called.
It was the same man that earlier had gesticulated to me.
Wait, he says smiling, look, I don’t agree with my father.”
“L’opera”, now an internationally distributed magazine, was thus created.
From then on these two realities have grown side by side, earning both respect and the affection of professionals and theatre lovers alike.
Michele at this point had already laid the foundations that would make Peroni a landmark in this sector.
The business consolidated its foreign markets, in particular those in Spain, France, Switzerland and Japan, and in the 1990s opened agencies to market its own products in each of these countries.

In 1998, the new headquarters at Gallarate were inaugurated and, at the close of the millennium, Michele again gave Sabino Lenoci backing for another new specialist magazine: “Musical!”, this time targeted for lovers of theatrical musicals.

And so to 10 March 2000. It was a mild early afternoon, one of those in which, after so much wintry greyness, whoever owns a motorbike opens up the garage to let the sun shine on its chrome work.
After having covered millions of kilometres travelling from one theatre to the next, by road and by air, Michele Peroni lost his life in a motorcycle accident just a few hundred metres from his company doors.
Those who were familiar with his sense of irony, not inferior to that of fate, know that in the choice of a solution such as this Michele would have gladly had a hand in it.
The firm he left behind is still a family business. But it is one of the most notable activities in the sector, and not only in Europe. One asks what the future holds, Michele’s children are still too young to manage the staff of over fifty people who work for Peroni.
Someone stepped forward, notably from behind the scenes, where she had always been. It was a petite woman, who at all costs did not want to see that which her husband had built up be lost.
But perhaps she did more than see. “I sewed the first curtain for him”, she confessed. Everyone clustered around her, and everything goes on.
What has happened since then? “When there is a decision to make and I speak with my collaborators, first we ask ourselves what Michele would have done, then we decide”, says Elisabetta Peroni, the petite woman.
What does the firm think? “The system seems to work, in the last twelve months sales have increased by 15%”, cheerfully states the architect Gianni Crevacore, responsible for the technical division at Peroni.
To whose merit? “With Michele’s demise we have all tried to do better than before. Clients immediately placed their trust in us.
I don’t believe that anyone of them has regretted this.” 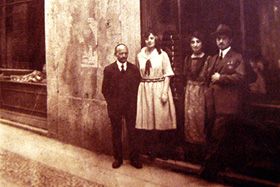